If you’re looking for a hotel that’s out of the ordinary, a boutique property is your best bet—and there are dozens in Singapore. Book a stay in an art deco building from the 1950s, a refurbished warehouse that was once an illegal distillery, a hotel that has robot housekeepers, or any of these other interesting boutique hotels in the city. 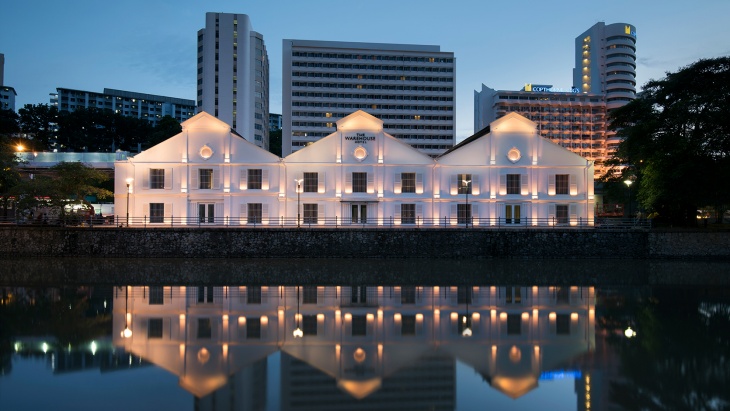 ‘Minimalism’ is the calling card of Lloyd’s Inn. This hotel is decked out in a monochromatic palette and lots of greenery, making it feel much like a tranquil resort—except this one is smack in the middle of the city. With rooms painted in white, plenty of natural light, a roof terrace to chill out on, and a dipping pool that’s surrounded by lush leaves, it’s hard to find a hotel as photogenic as this. Lloyd’s Inn is also a stone’s throw away from the Orchard Road shopping district, so you can dive straight into the city bustle after you are all rested up.

Classic Parisian influences touch every wall and piece of furniture in The Vagabond Club’s red-and-gold interiors, which have been designed by French designer, Jacques Garcia. There’s a ritzy vibe to the hotel, which is emphasised by the life-sized brass elephants and hand-hammered gold leaves in the lobby, plush crimson couches, and video art installations in the lifts.

Each of its 41 rooms is furnished with vintage and modern amenities, hardwood floor, Italian marble finishes, and glass mosaic bathrooms.

For something more lavish, the Vagabond Executive Club Suite is both large and luxurious. Goose down pillows and comforters ensure that you will sleep like royalty, while free flow wines and spirits in the hotel’s Executive Club Lounge during the evenings will let you party like them, too.

Ready yourself for a blast into the past when you check into Hotel 1929.. The hotel is housed in a row of five conserved shophouses, with narrow corridors that are flanked by black-and-white photos of life in Singapore at the turn of the 20th century. The rooms are gorgeously retro, too, with 1970s-inspired furniture and parquet floors. Guests can kick back and relax at The Patio, an outdoor garden on the second storey, or chow down at Birders, the hotel’s restaurant. Hotel 1929’s location on Keong Saik Road also means you’re within walking distance of the many buzzy restaurants and bars in the neighbourhood, such as Gibson and Neon Pigeon.

Panels of red, blue, yellow and green comprise the façade of the Mercure Singapore Bugis, whose 395 rooms, lofts and suites are all inspired by local heritage. Artworks that reference the city’s shophouses, traditions and cultural icons hang on the room walls, while the hotel lobby is awash in colour thanks to the Peranakan-inspired tiles and patterned carpets. A sky deck on the rooftop and an infinity lap pool on the seventh storey are quiet oases for relaxation, overlooking a glorious view of skyscrapers and historic buildings. The hotel’s vicinity is just as rich in heritage: visit the Kwan Im Temple, established in 1884, and the Sri Krishnan Temple, a Hindu place of worship that can trace its roots back to 1870.

Located along the banks of Singapore River, the godown that houses The Warehouse Hotel harks back more than a century—it was once a spice trading hub, then an illegal distillery, and even a discotheque in the 1980s. Now, however, it is one of the city’s most stylish hotels. The rooms are decked in industrial-chic décor, with wooden panels and sleek beams, and feature a neutral colour palette. After admiring your room, climb up to the rooftop infinity pool for a panoramic view of the Singapore River and Robertson Quay neighbourhood. Then break for a meal at Po, the hotel’s restaurant that whips up modern Singaporean cuisine such as Iberico satay (grilled skewered meats) and Hokkien mee (wok-fried noodles) with Carabinero prawns.

Tech-savvy and with stark, minimalist interiors, this colourfully lit hotel is perfect for the young traveller. There are self check-in counters to quicken the process, and rooms are cleaned with assistance from robots, so don’t be alarmed when a linen-wielding machine rolls up to your door. The rooms themselves feel like the homes of friends—if you count sophisticated designers among them. Some have glass-ensconced living areas, others have outdoor terraces, and even the smallest room has a mirrored, four-metre-tall pitched roof that resembles a chapel. Pair your stay at M Social with a Saturday night out at any of the bars and pubs right outside the hotel’s doorstep in the Robertson Quay area.