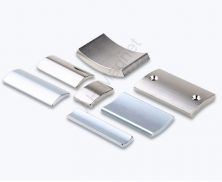 What Is a Rare Earth Magnet?

A rare-earth magnet is a magnet made from one of the rare earth elements (of which there are 17) in the Lanthanide series of metals in the periodic table. The two most common rare earth magnets are Neodymium (Nd-Fe-B) and Samarium Cobalt (SmCo). Read more about these two types of magnets.

The term “rare earth” can be misleading because rare earth metals are not very rare. They’re actually relatively abundant in the Earth’s crust, and the most common ones are found in concentrations similar to commonplace industrial metals such as tine, copper, and zinc. They’re called “rare earth” since they aren’t found in large, concentrated amounts. Rather, they’re mixed in with other elements, making them economically challenging to mine. As a result, only a few sources provide most of the world’s supply of rare earth elements.

By far, China is the world’s largest producer of rare-earth metals, with a yearly production of 140,000 metric tons (MT). The US is the next largest producer, with an annual output of just 38,000 MT. The only US mine is the Mountain Pass mine in California. Even though the US is the second-largest producer, the US still heavily imports rare earth materials and metals since the output isn’t plentiful. In contrast to China, Vietnam and Brazil are the 9th and 10th largest producers with 1000 MT each.

How Rare Earth Magnets Are Separated

Since rare earth elements are found among other elements, they must be separated using a solvent extraction process. This process involves performing a chemical reaction to force one of the two elements to change phases (for example, going from a liquid to a solid). When this chemical reaction happens, the elements separate, and the concentrations of elements change. However, the change is minor, so it takes thousands and thousands of extractions to get to a purified phase. As a result, while the process works well, it’s a very inefficient and time-consuming process that produces a huge amount of waste.

Neodymium and Samarium Cobalt: The Two Most Common Types of Rare Earth Magnets

Neodymium (Nd-Fe-B) and Samarium Cobalt (SmCo) are the two most common types of rare-earth magnet materials. Since they both come from the same series of metals, they have similar properties and crystal structures. Both types are extremely strong, and they tend to be brittle.

As described in the What Is a Rare Earth Magnet section, rare earth magnets are mined along with other elements, so they’re not pure elements. Neo magnets are composed primarily of neodymium, boron and iron, and samarium cobalt is composed of samarium and cobalt. 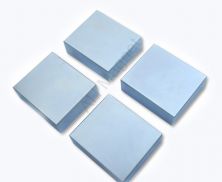 Both materials come in different grades, or strengths, and have different magnetic and physical properties. Check out our magnet comparison chart for product details.

These magnets tend to be brittle and are vulnerable to corrosion. Manufacturers typically nickel-plate the material to protect it from oxidation.

Choosing the Right Magnet for Your Application

From a business need to a home project, you could have a wide (or slim) range of requirements for a magnet. Don’t feel like you’re alone in your decision-making though - we’re always here to help you!

Here are some things to consider:

What type of application is it? Do you need a magnet to hold something in place? To organize an area? Or a specific application for a manufacturing floor?

How strong of a magnet do you need? You may need something that can do more (or less) than you think.

Will you have any special temperature requirements? Will the magnet be in the hot sun all day or in a refrigerated compartment?

What’s the space like? Is it tight? Large? Heavily trafficked?

What shape do you need? A block? Tube? Latch?

You may have other considerations as well, and we can help you with finishes, grades and pull ratings.

With so many magnet options, it can be a challenge to know which magnet is right for your project. Contact us, and we can help! Feel free to send us a picture, sketch, or drawings of the drawings or the area, and any other information you have.