Besides being home to hawker centres that offer delicious, affordable meals, Singapore also boasts a constellation of Michelin-starred restaurants, a number of which can be found in the Marina Bay area.

If time is of the essence during your trip, and you’d like to tick as many world-class restaurants off your list, start your gastronomic journey at the bay, with a variety of cuisines from French fare to Japanese-European.

Newly awarded establishments are denoted with an [N] for your convenience. 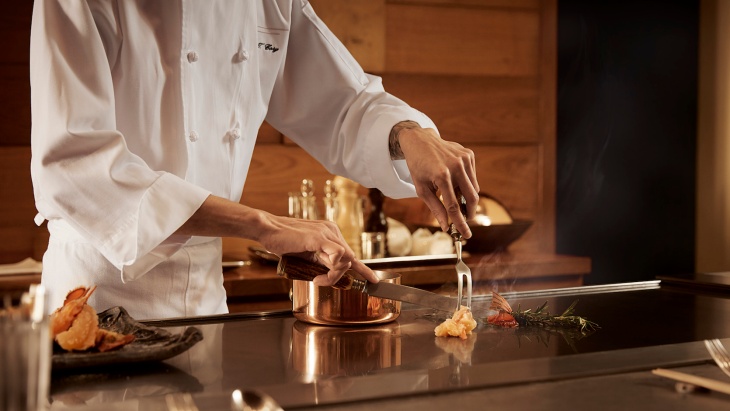 If you’ve never thought of food as visual art, a visit to Odette will likely change your perceptions.

To say that Odette is known for French cuisine would be a bit of an understatement: Aptly located in the National Gallery Singapore, the restaurant is famous for the artistic presentation of its food, which is as beautiful to look at as it is exquisite to taste.

Taste the flavours of the sea with a visit to Shoukouwa. This intimate restaurant is located at One Fullerton, making it a great place to have dinner, followed by a stroll to take in the beautiful waterfront view.

Inspired by the Edomae (literally ‘in front of Tokyo Bay’) tradition of sushi-making, this establishment exemplifies Japanese cuisine at its finest, with an omakase (chef-selected) menu of sushi offerings made from the freshest seafood.

The maguro (tuna), sea eel and halibut are flown to Singapore daily from Tokyo’s famed Tsukiji market, and prepared before your eyes by Shoukouwa’s team of world-class sushi chefs.

Chef Tetsuya is as famous for his skills in the kitchen as for his ability to mentor protégés: Fellow Singapore-based chefs of Michelin star winners like Sam Aisbett (Whitegrass), Sun Kim (Meta), and Rishi Naleendra (Cheek Bistro) have honed their craft under his supervision.

Formerly The Kitchen at Bacchanalia, Vianney Massot is helmed by the 27-year-old chef who lends the restaurant its name, and boasts both a new concept and menu.

Take your dining experience to the next level at JAAN, an intimate, 40-seat restaurant perched on the 70th floor of Swissôtel The Stamford. The restaurant offers an untrammelled vista of the Marina Bay area to accompany its delectable, modern British fare.

With a name derived from the Cambodian word for ‘bowl’, JAAN’s philosophy towards the culinary arts—Reinventing British—presents the food of his childhood with a fresh, modern perspective. Born in Devon, England, JAAN’s Chef de Cuisine Kirk Westaway grew up with memories of picking herbs and vegetables with his mother in the family garden, and channels this deeply rooted passion for childhood tastes into exciting new flavours.

While some chefs find an early childhood calling for the culinary arts, Colombo-born chef Rishi Naleendra of Cheek Bistro fell in love with the world of food later in life, during a part-time café stint in Melbourne, Australia. Since then, chef Rishi has refined his culinary techniques at some of the hottest restaurants in Australia, such as Taxi Kitchen.

Cheek Bistro refers to the working relationship between chef Rishi, who ran the kitchen, and his wife Manuela, who managed the front of house.

While the founders have since made way for a dynamic young team, Cheek Bistro’s unpretentious Western classics—like Iberico pork chops and smoked mackerel with seaweed—are bound to delight your tastebuds.

Helmed by Grand Chef Relais & Châteaux Emmanuel Stroobant, a pioneer of Singapore’s fine dining scene, Saint Pierre serves impeccably prepared French dishes that will enhance your appreciation for Gallic cuisine’s long heritage of excellence. Chef Emmanuel began his career in F&B, cleaning dishes in Belgium at the tender age of 16. He then embarked on a culinary journey that led him to train at various Michelin-starred establishments before opening his first restaurant at just 23.

Saint Pierre’s classic and discovery menu will certainly prove to be an epiphany for Francophile food lovers. Dishes here include Hokkaido hairy crab with corn and lemongrass, and Anjou pigeon with nashi and tonka bean.